5 Things You Need Tested at the Queen Victoria Market Melbourne

Since established in 1878, Queen Victoria Market into a selection of Melbourne and surrounding residents to shop for their daily needs. At the time, the money generated from gold mining in Victoria often spin in this market.

Now, the market is in Elizabeth Street is almost always a tourist destination for tourists visiting Melbourne, Victoria, Australia.

With a location only about 2 kilometers from Federation Square in downtown Melbourne, Queen Vic, so the market is often called, can be reached by tram for free. Yes, the market area located on Elizabeth Street are still included free tram zone in Melbourne.

With the facade of the building like an old building typical of Europe, most of the market stands at the former tomb area residents.

"When the market was built, more than 10,000 bodies were moved," said Bettina de Chateaubourg, one of the staff of Queen Victoria Market in early June 2016.

Bettina said, at present, there are about 1,000 kiosks operating in this market. The stalls are grouped in a number of areas based on the category of goods sold, such as fresh foods, such as vegetables and fruits, herbs, meats and fresh seafood, food, and fashion and souvenirs.

At the front, after the entrance of the main entrance, visitors will immediately meet with stalls selling a wide variety of meats, from beef, poultry, fish, up to kangaroo meat. There was no impression of shabby though this area belong to the most wet. The floor was clean, even when newly fallen rain that morning, and everything was neat.

Karma Rennie, Food Marketing Project Coordinator at the Queen Victoria Market, said there were about 1,000 kiosks operating in this market. The manager always check that the goods sold will always vary.

"The way we sustain this market is ensuring that the seller does not sell the same product," said Karma.

This market, he added, is open every Tuesday, Thursday, Friday, Saturday and Sunday. The management also hold a night market every Wednesday evening, starting at 5 p.m. to 22:00 local time.

Karma noted, there are at least 10 million tourists who come to the market each year. Most come to hunt for food and souvenir of Australia.

For the visitors, there are at least five things that must be done when it comes to this place, namely:

Tasting donuts are famous throughout Melbourne this abstinence to be missed. The location of its outlets located in the rear of the Queen Vic, exactly behind the sellers of fresh fruits and vegetables.

The employees make the donuts that effort has been underway since 1950 is on top of a white van bearing the "American Doughnut Kitchen" blue is modified into a mini kitchen. These donuts are also sold directly from a small window in the rear of the van.

This is in contrast with donuts donuts in general have a hole in the middle. This donut-shaped oval and contain raspberry jam in it and covered with fine sugar on the outside.

Soft texture and sweet taste of sugar and acid of a jam in it blends perfectly. These donuts are very good to eat when in the warm.

Five donuts sold at a price of 5.5 Australian dollars. Of course, it is not enough if you only eat one fruit!

Anyway, do not buy it in a state of hunger for a rather long queue of buyers. Around 10:30 alone, the queue had reached about three meters.

"Boreks, made fresh on premises," read the writing on the kiosk boreks in the Queen Vic. Sandwiches and oval shaped flat typical Turkish popping in Melbourne is made directly at the booth.

In the Queen Vic, gerainya never stopped serving buyers. Bettina even say, as tasty and the price is cheap, many workers around the Queen Vic came to buy borek for lunch.

There are a number of borek menu offerings, like Spicy Lamb and Chicken and Veggie Borek Borek Borek or Spicy Potato, Spicy Potato and vegies Borek, Cheese and Spinach Borek for vegetarians. The average sold at a price of 3-5 dollars Australia.

Which is not less fun to do in Queen Vic is Tastings samples of food sold in the Queen Vic, such as cheeses, condiments and assorted pastries. Most stores offer. Do not be embarrassed to ask politely.

One to try is the variety of cheeses that are sold in stores Pavilion. Above the glass display case, when it is written "best cheese of my life" in the list of mainstay cheese sold in these outlets.

The salesman said, his name Bonnisimo cheese, a mixture of Swiss cheese, cheedar and parmesan. Salty but also leaves a sweet sensation on the tongue.

In addition, there are also so-called Gruyere Cheese has won an award as the world's best cheese. 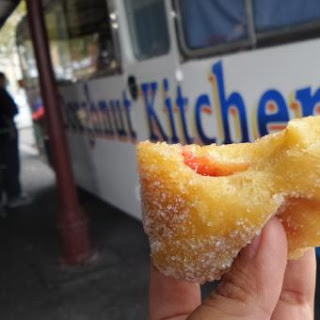 Milling the coffee aroma in the air when it gets into the area Deli. In the Queen Vic, the visitors can hunt for delicious coffee, for example, in Market Lane.

Einar Hansen, one of the managers of Market Lane, say, for 2.5 years this cafe operates in the Queen Vic, latte and espresso into your favorite coffee sought by visitors.

In this place also, he continued, visitors can taste the coffee in the cups mini and tell where the beans came from.

Not only coffee, hot chocolate also became a mainstay menu that can be hunted in the Queen Vic. In this market, there are outlets of Koko Black.

Koko Black is one of the famous chocolate brands in Australia which is a family business from Melbourne. Outlets scattered in Melbourne, Canberra, Adelaide, Sydney and Perth.

In addition to hot chocolate, in every salon, the name for their outlets, also sold various types of chocolate are suited purchased for souvenirs, drinks, mousse, ice cream, and a cake made of chocolate 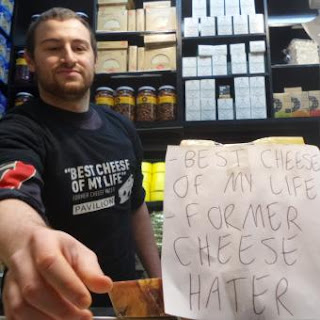 At the back of this market, there are open but roofed very broad. Here, the typical Australian souvenir hawkers and fashion products and cheap trinkets to hold merchandise.

The tourists can hunt for souvenirs are sold at a low price, like a boomerang, dolls, bags, purses, towels, until the T-shirt with 'Australia' or display the typical Australian animals such as kangaroos and koalas. Not only that, visitors can also buy nan thick leather jacket, children's books, bag up the necklace in the region. 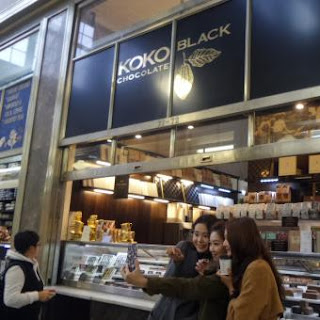