The roads to Buton, Popped into Fort Largest in the World


Generally, the fort was made as a form of defense against enemy soldiers. But unique in Buton, Southeast Sulawesi last castle built as a place of settlement. The fort is a palace fortress Buton.
"So the first Buton live by the sea, there are many pirates, one of which is the famous pirate-eyed one, Labolontio. For that people agreed to build settlements higher at fort palace Buton," said tour guide at Fort palace Buton, La Ode M. Adam Vatiq to KompasTravel in Buton, Southeast Sulawesi, on Monday (22/08/2016).
Buton fortress palace was built in 1613 and was built in stages over the past ten years. According to La Ode initially materials used to build the castle not a stone but the pineapple-resistant timber of insects. Then improved and enlarged the fort continued until today has an area of ​​22.8 hectares.
Size is fairly fantastic fortress, to enter as a bastion of the world's largest MURI version and the Guinness Book of Records in 2006. To date Buton fortress palace still serves as the residential area of ​​Buton.
"The function of this fort is twofold as a residence and pengkuburan," said La Ode. There are three groups who live in Fort palace Buton, namely Kawumu (candidate sultan or prince), Malacca (tribal councils), and Papara (common people).

Fort palace Buton tersapat 12 door fan 16 or indentation bastion for cannons. Each bastion and the door has its own name. In the complex of the Buton palace fortress there are also many old buildings of historic sites at once. For example Stone Popaua, which is where the swearing-in for new Buton Sultan, Sultan Buton Great Mosque, the tomb of the last king of Buton Sultan Murhum and flagpole hundreds of years old. 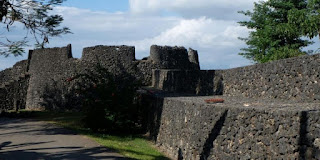 To visit the fort palace Buyon best time is in the afternoon until the early evening. For views presented from the top of the castle is a view of Bau-Bau with vast ocean expanse.
To get to the Old Fortress palace, you can rent a car or motorcycle crate vehicle. Public transportation is still difficult to find in Buton. There is no charge for entering the Old Fort palace, just a voluntary donation fee. Suggestions KompasTravel, use tour guide services for each of the sites and even the lives of the residents in the complex of the palace fortress Old historical value that is unique and valuable.
Posted by Nobo